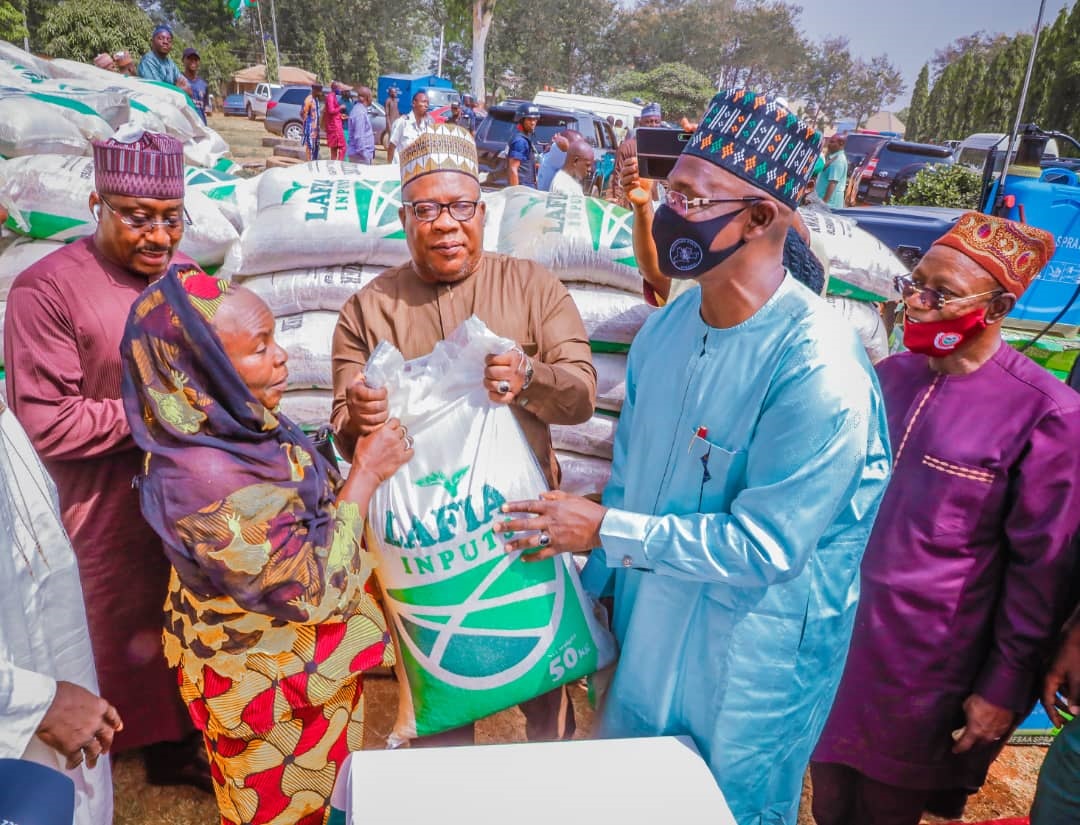 Nasarawa State governor, Engineer Abdullahi Sule, has flagged off the sales of fertilizer to farmers for the 2021/22 dry season farming, warning officials incharge of the distribution of the commodity against racheteering.

Engineer Sule flagged off the fertilizer and other farm inputs sales, at a ceremony which held at the headquarters of the Nasarawa Agricultural Development Programme (NADP), on Wednesday.

According to the governor, his administration will continue to support farmers in the state towards retaining the current position of Nasarawa State in the country in terms of crops production, especially seseme, yams and rice, with the state rated first, second and third respectively in the country.

Engineer Sule however frowned at situations where fertilizer meant for farmers are diverted and sold in the open market.

He therefore called on local government chairmen to liaise with traditional rulers and community leaders, towards ensuring that the commodity is sold only to genuine farmers.

Commenting further, the governor said his administration has given priority attention to agriculture, because it is the major occupation of the people of the state, aimed at improving the livelihood of the citizens through employment generation, as well as achieving sustainable food security.

He emphasized that the event was in furtherance of the determination of his administration to ensure all year round agricultural production, adding that government is committed to improving post-harvest and value chain management for sustainable food production.

While recalling last year’s collaboration between the state government and the National Centre for Agricultural Mechanization (NCAM), where a field day was organised to showcase and demonstrate some agricultural equipments and machineries, the governor announced further collaboration with the centre in the area of manpower development, which saw to the training of selected youths processing, preserving and packaging of identified agricultural produce for small and.meduim scale entrepreneurship.

He added that, in another collaboration with the Nigeria Stored Product Research Institute (NSPRI), which saw to the training of selected staff from the NADP on technological innovations on post-harvest management.

This is even as the Japan International Cooperation Agency (JICA), recently donated 55 irrigation pumps to 55 dry season farmers across three groups, in order to boost agricultural production.

The governor used the opportunity of the event to commend the Federal Ministry of Agriculture and Rural Development, for collaboring and partnering with the state in the areas of provision of training and spray kits to 50 youths in the state, as well as provision of three Bajaj motorcycles.

He however urged the Federal Government to explore more areas collaboration in the collective effort to turn around the economy of the country.

In a goodwill message, state chairman of the All Farmers Association of Nigeria (AFAN), and former chairman of Akwanga Local Government Area, Hon. Samuel Meshi, commended the governor for sustaining the previous feat of launching the sales of fertilizer for dry season before the year runs out.

Hon. Meshi equally commended Engineer Sule for the relative peace being enjoyed across the state, which made it possible for farmers in the state to enjoy bumper harvest.

On his part, the Emir of Lafia, HRH Justice Sidi Bage Muhammad (rtd), urged farmers in the state to take advantage of the gesture by the state government to engage in dry season farming