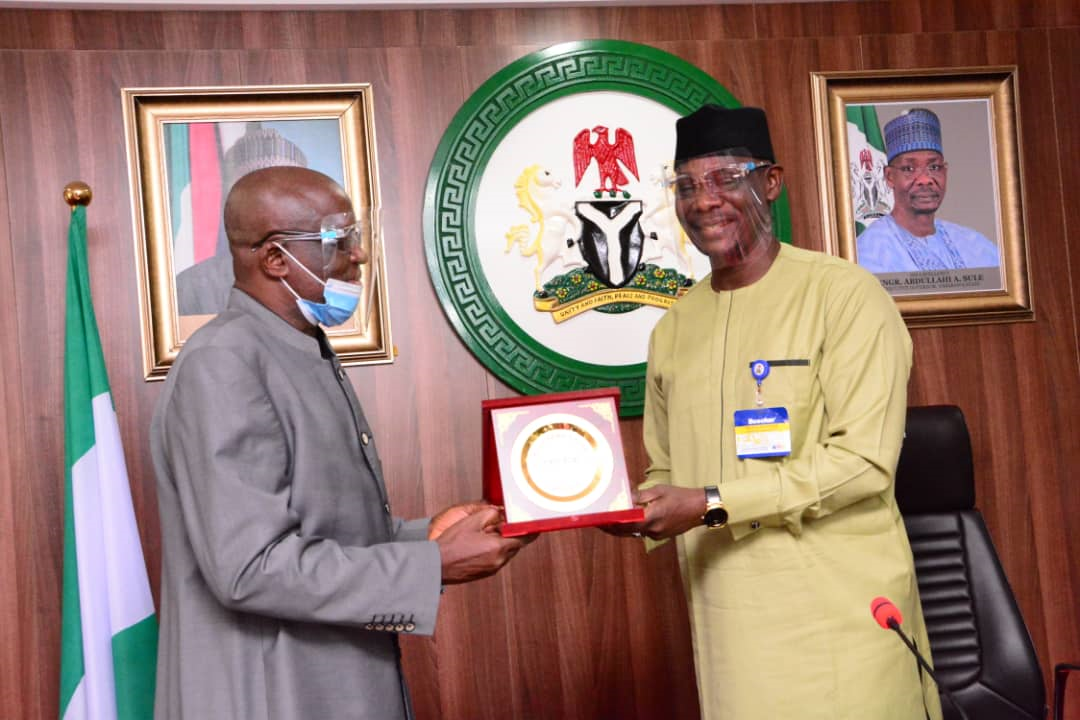 The Registrar, Joint Admissions and Matriculation Board (JAMB), Professor Ishaq Olyede, has commended Nasarawa State Governor, Engineer Abdullahi Sule, for naming of one the JAMB CBT centres after his immediate predecessor.
Prof. Oloyede made the commendation while on a courtesy call at the Government House, on Wednesday.
According to the JAMB registrar, the gesture is really impressive, especially at a time when some people are busy fighting each other, instead of facing the job they were elected to do.
“That you could have named such beautiful place after your immediate predecessor was very impressive.
“It may be ordinary to you but given our circumstances and what we see here and there, it’s  not ordinary at all,” he stated.
On the purpose of the visit, the JAMB registrar said he was in the state, alongside management of the board, to monitor the implementation of the Memorandum of Understanding for the setting up of professional test centres in Lafia, signed between his organization and Nasarawa State Government, with a view to fine tuning grey areas.
While commending the state government for facilities in the centres, Prof. Oloyede however said there was need to delineate between the three CBT centres for easy identification, especially since 2000 candidates are expected to use the facilities.
He disclosed that after carefully weighing on the issues, they decided to name one of the remaining two CBT centres Engineer Abdullahi Sule Hall, while naming the remaining centre JAMB CBT Centre.
The JAMB registrar further commended Engineer Sule for securing the release of all the 26 FRSC officials recently kidnapped, as well as his inroads in education.
Prof Oloyede lamented that security has become a problem in the country, blaming lack of proper education and growing poverty as part of the problems causing insecurity in the country.
Responding, Nasarawa State Governor, Engineer Abdullahi Sule, expressed appreciation to JAMB for bringing the professional test centres to the state.
While noting that the state is also monitoring the implantation of the agreement entered into with JAMB, with a view to making sure that it fulfil all its responsibilities, Engineer Sule said the CBT centres came at the right time.
According to the Governor, with the state’s proximity to the FCT, coupled with the attraction the state continue to receive and with industries coming into Nasarawa, the CBT centres were the right thing for JAMB to put in place.
Commenting on naming one of the halls after his immediate predecessor, Engineer Sule said that was the only right thing to do, since former governor, Senator Umaru Tanko Al-makura started the project.
He disclosed that the 300KV Akurba power substation, which he inherited at 70 percent completion, now at 98 percent completion, will also be named after Senator Al-makura.
Engineer Sule indicated equally that he will name the Farin Ruwa project when completed after the first civilian governor of the state, Senator Abdullahi Adamu, who initiated the project.