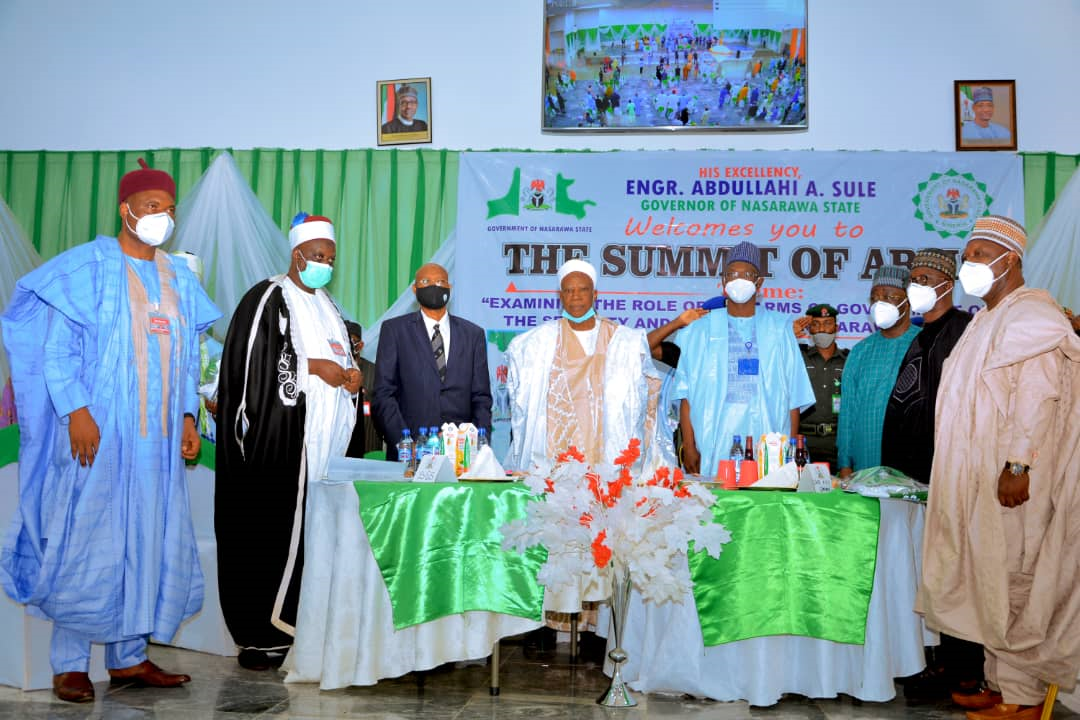 [ngg src=”galleries” ids=”31″ display=”basic_thumbnail” thumbnail_crop=”0″]Nasarawa State Government has convened a summit bringing together members of the three arms of government, namely the executive, legislature and judiciary, with a view to understanding and appreciating their distinct roles.
The summit, which is the first of its kind since the creation of the state, was organized by the office of the Secretary of the Government of Nasarawa State, which held at the Government House, on Thursday.
The parley between the three arms of government was part of activities marking the 60th and 24th anniversaries of Nigeria and Nasarawa State respectively.
Speaking at the event, Nasarawa State Governor, Engineer Abdullahi Sule, said the summit will provide the opportunity for the arms of government to understand each other, even as he emphasized that the executive arm of government is receiving maximum support from the legislature and judiciary.
Engineer Sule added that the summit will also deepen the democratic process in the state, towards the socio-economic development of the society.
The Governor explained that top government functionaries and other critical stakeholders, from the three arms of government, to facilitate the cross fertilization of ideas, share experience, as well as appraising distinct responsibilities of the arms.
He stressed that this was with a view to evolving the needed enduring synergy for a conflict free administration, as well as reinforcing interdependence of each of the arms, according to the tenets of the constitution.
“This is in line with the pledge which I made when I took over the mantle of leadership, to create the enabling environment for the arms of government to effectively and efficiently, discharge their responsibilities, for peace, progress and development of our dear state,” Engineer Sule stated.
Engineer Sule said his administration has supported the call for the independence of the legislature through the provision of required tools for it to carry out its statutory functions with minimum hitch.
This is even as he added that his administration has continued to sustain its regards and reverence to the judiciary and its independence, towards quick dispensation of justice and the interpretations of the laws.
The Governor further emphasized that, considering the journey so far, especially towards entrenching the democratic process, in tune with global best practices, the existing unity of purpose, have been inspirational, which has given the administration the needed strength to forge ahead in the collective commitment to provide leadership for growth and development.
He noted that it’s however pertinent to often review certain tendencies that could jeopardize the seeming harmonious relationship between the arms of government, which informed the need for the summit.
The Governor then harped on the need for maturity and tolerance so that the arms of government can work together to the benefit of Nasarawa State and the people.
Other speakers at the event include, the first civilian governor of the state, Senator Abdullahi Adamu, the Speaker of the Nasarawa State House  of Assembly, Rt. Hon Ibrahim Balarabe, the Chief Judge of Nasarawa State, Justice Suleiman Umaru Dikko, the State Attorney-General and Commissioner for Justice, Associate Prof. Abdulkarim Abubakar Kana and the Emir of Lafia, HRH Justice Sidi Bage, among others.
The summit has the theme: “Examining the Role of Government on Security and Economy of Nasarawa State.”